Ur-hippies from Germany to California

In a previous post I applied the term 'hippie central' to Schwabing (a neighborhood in Munich). I meant 'hippie' to refer generally to Bohemian tendencies, but I've discovered closer ties between the Bohemians of early 20th-century Germany and the American hippies of  the 1960's. The man pictured above, Gusto Gräser, was a nomadic 'poet-prophet' who lived in many parts of Germany -- he's in Berlin in the above photo -- including Munich and it surroundings. He eventually settled in Munich.

Gräser was one of many naturmenschen, men who rejected industrialization and the unnatural trends of urbanization and who adopted a 'back to nature' creed. Although Gräser lived in Munich and visited cities, for much of his life he lived in more pastoral places. He lived for a while at Monte Verità (pdf) near Ascona in Switzerland. Monte Verità, which Gräser co-founded, was similar in many ways to a hippie commune. Its founders were pacifists who wanted to establish a communal, vegetarian and clothing-optional settlement far from any cities. More information about this commune can be found at the next link along with several photos, but note that some of the depicted inhabitants of Monte Verità aren't clothed. Among the inhabitants were so many artists and authors from Schwabing that it was called 'Schwabing von Schwabing'. These inhabitants included Otto Gross, Leonhard Frank, Erich Muhsam, Franziska Countess zu Reventlow, Oskar Maria Graf, Marianne Werefkin, Alexej Jawlensky, Hugo Ball, Paul Klee, and Ernst Toller. One of the commune's most famous visitors was Herman Hesse.

Some of the naturmenschen moved to the USA. For example, there was Hermann Sexauer, 'a philosophical anarchist, a radical pacifist, a theoretical nudist, and an anti-communist,' who was born in Teningen, Germany and who moved to the USA in 1906, eventually establishing a natural foods store in Santa Barbara. More influential was Bill Pester of Saxony. He left Germany (to avoid military service) and settled in California. Here are some photos of Pester, including one of him at his hut in Palm Canyon, California. 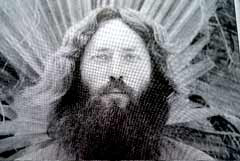 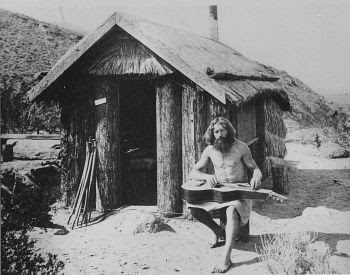 Pester met a young American named eden ahbez (who eschewed capital letters) and became ahbez's 'mentor'. Ahbez and the other young Americans who followed Pester called themselves 'nature boys' (a loose translation of naturmenschen). In 1948, ahbez wrote a song about Pester and called it 'Nature Boy'. Nat King Cole recorded it, which drew media attention to ahbez. He appears briefly in this clip followed by footage from another TV show in which Cole performs the song.


The nature boys received some attention also from Jack Kerouac's reference to them in On the Road. And they became well-known in California simply because of their distinctive appearance.

This story has been told before (esp. at the above links) but I wasn't aware of it until I looked up Monte Verità.
Posted by praymont at 8:57 PM

very interesting! I have been doing research on Graeser and Monte Verità for 50 years. My archive is the most complete on MV, including as its heart the writings of Gusto Graeser. By and by editing his poems. Exhibitions and lectures in many towns, the next will be in Berlin in october. do you know the book by Martin Green: Mountain of Truth? Graeser had decisive influence on Hermann Hesse, Gerhart Hauptmann, Martin Heidegger and others. Living underground, often exiled, arrested and persecuted. That is why we know so little of him. His favorites were Nietzsche, Laotse, Thoreau and Walt Whitman.
Thank you very much for your blog!
Hermann Mueller

Hi Hermann -- Thanks very much for your note. I wasn't aware of the book by Green, but I've ordered a copy.

What is little known and seldom told is that there was a blooming of these groups among the Youth in the Weimar Republic who were attacked, sheared and shaved in Public (just like the Orthodox Jewish) after the rising of the Nazis to Power for their positions against War and Militarization. Some of those who further refused to join conscriptions were sent to Concentration camps.

Hi my name is John Balestri, I live in SYD Australia

My mother was just looking thorough some of her old stuff her mother left years ago. In doing so she came across some really awesome charcoal drawing, hand written letters, paintings and really old art portfolios. She told her these where her grand fathers on her mothers side. His name was Gusto Graeser and upon googling him I have found out a bit about him.

I noticed that your site mentioned him and I was wondering if you could give me any info on who I should speak To about finding out more on him and show his works to as they are amazing and seem very significant to message to the work through art, letters, and poetry.

Thanks for your time

Anonymous said...
This comment has been removed by a blog administrator.
November 7, 2011 at 6:07 PM

Hi, John. Wow! This sounds interesting. I have tried to contact the gentleman who added the first comment in this thread, Hermann Mueller. I don't have his e-mail address, but it looks like it's possible to contact him via the "Kontakt" link in the left menu at http://www.gusto-graeser.info/ According to the German Wikipedia article on Gusto Graeser, he had two brothers, Karl and Ernst, at least one of whom was an artist.

Hermann Mueller lives by Ascona Switzerland. And he really is the expert on Gusto Gräser. julianmartin@me.com