I did not make my entry into the Bohème until I had pushed back the thick baize curtain behind the glass door of the Café Stefanie, seated myself at one of the little marble-topped tables and ordered an absinthe. (Richard Seewald, 'In the Café Stefanie')


Researching Munich's café life in the early 20th century has proved to be an excellent 'way in' to the cultural and artistic milieu of a great and very influential creative centre. I don't know if it was on a par with café life in Vienna, but the gathering of creative and intellectual talents in the cafés of Schwabing at least comes close.

One of the liveliest cafés in Schwabing was the Café Stefanie. Destroyed in WWII, it was located at what is now Amalienstrasse 25 (at the intersection with Theresienstrasse). You can see its location at roughly the 9-minute mark of this YouTube guide to Schwabing.

The Stefanie was one of the three central European cafes that were nicknamed Café Grössenwahn (Café Megalomania) -- the other two were the Café des Westens in Berlin and the Griensteidl in Vienna. The characterization of these three establishments' regular customers as megalomaniacal might have been an act of mockery by others, but it was also a bit of self-irony on the part of the customers themselves, who included many writers, activists, and artists.


It had two rooms, a large one with two billiard tables ... and a smaller one at whose windows the chess players sat. ...  In the smaller room the chess-players sit crouching silently over their boards: Gustav Meyrink, who popularized magic and horror, is playing with Roda Roda [aka Sandór Rosenfeld], who substitutes for the officer's uniform he used to wear the obligatory red waistcoat and the monocle in his rubicund bulldog face. (Richard Seewald, 'In the Café Stefanie')

While the more established artists and intellectuals (inc. members of the Blue Rider) tended to congregate at the Café Luitpold, the Stefanie drew a younger, more left-wing crowd. Among its habitués were the dramatist Frank Wedekind, the artist Alfred Kubin, the novelist Heinrich Mann, and the fiction writer Gustav Meyrink, who used the Stefanie as the setting for a short story called 'Wie Dr. Hiob Paupersum seiner Tochter rote Rosen schenkte', which appeared in an issue of Simplicissimus in 1915 (here's a pdf of that issue).

There were also several anarchists and communists, such as Erich Mühsam, Kurt Eisner, and Otto Gross. Younger customers included Oskar Maria Graf, Erwin Piscator, Franz Jung, and Emmy Hennings -- these last three would become influential in the Dada groups in Berlin and Zurich. Else Lasker-Schuler visited the Stefanie on her trips to Munich. And of course there was Franziska Countess zu Reventlow, a novelist, translator, and occasional prostitute who was a sort of cross between Lou Andreas-Salomé and Anita Berber. (Update [July 28]: Here's more about the Countess.)


And the psychoanalysts: the unhappy Dr. Gross, son of the famous criminal psychologist, his waistcoat sprinkled with cocaine, who was put away by his father; Dr. Gösch, ... lecturing to an attentive following on his idea of circular marriage, Leonhard Frank whose Cause made him famous because he introduced psychoanalysis into literature. (Richard Seewald, 'In the Café Stefanie') 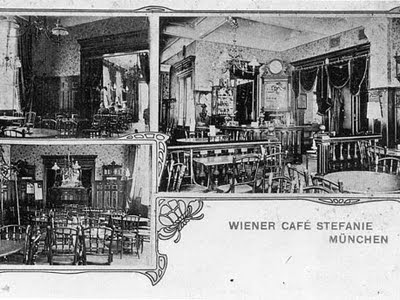 The Stefanie became a sort of home base for the revolutionaries who instituted the Bavarian Soviet Republic just after WWI. In that capacity it attracted the leading German anarchist Gustav Landauer (grandfather of Mike Nichols) and the logical positivist Otto Neurath (as an economic adviser). Lewis Feuer describes the centrality of the Stefanie to the communist uprising at the end of WWI (and notes that a young Werner Heisenberg was in the Freikorps that suppressed it).