Rowohlt and friends in Leipzig

In Saxony, Dresden is a more popular tourist destination than Leipzig. I was short of time at this stage of my trip, so I could visit only one of these cities. I opted for Leipzig, and I'm glad that I did. Historically, Dresden was the more extravagant capital of Saxony, while Leipzig was more prominent as a trade centre, but a very cultured one. Among Leipzig's former residents are Leibniz, Bach, Goethe, Mahler, Schumann, Wagner, Luther, Lessing, Nietzsche, and Schiller.

Rowohlt preferred to do much of his work in nearby bars and cafés. Over the lunch hours (one gets the impression that with Rowohlt lunch took hours), he and his associates did business at Wilhelms Weinstube [Wilhelm's Wine Parlour].


The student who introduced me to Hasenclever soon led us to the regular midday gathering in the back room of Wilhelm's Wine Parlour .... [T]he little circle was dominated by a colossal figure with enormously broad shoulders; beneath a tuft of ginger hair beamed the reddish face .... This was Ernst Rowohlt, bursting with vitality and joie de vivre .... [Kurt Pinthus, 'Leipzig and Early Expressionism', in The Era of Expressionism, p. 68]

According to my guide (Literarisches Leipzig), this wine parlour was located at Hainstrasse 23, where the ugly, low building is (lower right) in this photo: 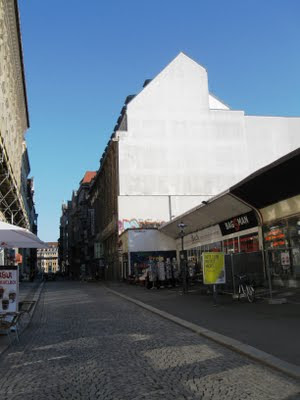 
[T]he midday gathering at Wilhelm's Wine Parlour ... became a breeding ground, then a centre, a place of pilgrimage for the young writers from the German-speaking world. Whenever any writer of the young or older generation came to Leipzig from Berlin, Prague, Munich, Vienna, West Germany he knew that he would meet Rowohlt and Werfel and Hasenclever and me and others like himself in that wine parlour. And he knew that he would then go on to the traditional coffee houses: the refined Café Felsche ... the stark Café Merkur ... or Café Bauer on whose old-fashioned red plush benches generations of men of letters had sat. [Pinthus, p. 71] (audio plays at last link)

Pinthus says that Werfel arrived in Leipzig at the end of October, 1911, and became an employee at the publishing firm.


With a powerful, though untrained, voice [Werfel] sang arias from his beloved Verdi ... and thunderously declaimed his hymnic poems. Every other day he would come and see me with a new magnificently declaimed poem. [Pinthus, p. 70]

Here's a photo that was reproduced in Reiner Stach's book on Kafka:


Pinthus recalls (p. 73) the day when he met Kafka (June 29, 1912): 'Brod turned up with a tall, thin, very pale, very shy person who hardly spoke at all: Franz Kafka.' In advance of this meeting, while Kafka toured the city, Brod had met with Rowohlt and the others and raved about his friend's work. Intrigued, Rowohlt suggested that Brod bring Kafka around for lunch.

Stach says that the meeting didn't go well, for Rowohlt was impressed by other extroverts, like Werfel, and not so much by shy, nervous characters like Kafka. (Kurt Wolff, at that time Rowohlt's 'silent' partner, wasn't so disapproving of shyness.) Kafka, too, didn't seem pleased with the encounter. He wrote in his diary, 'Strange daily gathering at noon in the Wine Parlour. Large, wide wine goblets with slices of lemon.' [Quoted from Pinthus, p. 73] Still, Brod succeeded in persuading the publisher to add Kafka to his small stable of authors.

As Pinthus said, in the evenings Rowohlt and company typically headed for a café, though it sounds like Werfel often went his own way. (Singing and thunderously declaiming all the while?) 'He usually went to the Café Felsche or the theater in the evenings, then spent the night making the rounds of bars, cabarets, and brothels.' [A Life Torn By History: Franz Werfel 1890-1945, Peter Stephan Jungk, p. 32]

While Werfel was making his evening rounds, Rowohlt could usually be found in the Café Zum Arabischen Coffe Baum, which opened for business in 1694. Its past customers include Schumann, Wagner, Liszt, Lessing, Gottsched, Goethe, and Bach. (The apple strudel here is perfect.) Here's the decoration above its entrance. Pinthus says that this decoration was installed by Augustus the Strong (and the profligate), and that it depicts 'a Turk sitting under a coffee bush holding a huge coffee pot while a cherub is passing him a cup of what the Leipzigers call the "hot stuff".' [Pinthus, p. 72] Of the café's past customers, its owners seem especially impressed by Schumann, to whom they've dedicated a room. 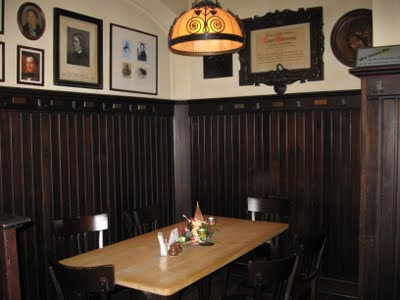 Once ensconced here for the evening,


Rowohlt reigned at a clean scrubbed wooden table where great quantities of Pilsner were drunk and many ham and egg sandwiches consumed. This was rounded off by a session in the spacious Central Theater Bar .... And there about midnight we would really let ourselves go [!?!], especially Ernst Rowohlt, full of enthusiasm, laughter and boisterous good spirits. [Pinthus, p. 72]

Rowohlt, Wolff and their employees were in their twenties at this time. Werfel, Pinthus, Hasenclever, and Willy Haas (a friend from Prague) shared an apartment. They enjoyed the lifestyle of rowdy grad students while launching one of the most important publishing companies of the 20th century.