Roth and Musil in Berlin 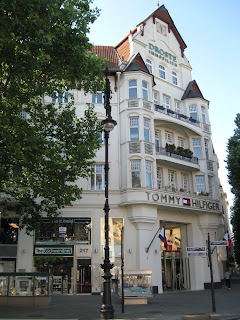 This building at Kurfürstendamm 217 in Berlin must have been a pension or hotel in the first third of the 20th century, since both Robert Musil and Joseph Roth lived in it at different times in the '20s and '30s (source: Literarisches Berlin).

A plaque on the building indicates that Musil wrote a portion of Man Without Qualities while residing at this address from 1931 until 1933. Here's a passage from Musil's diaries (actually from an unsent letter included in them) about apartment hunting in Berlin at an earlier stage of his life:


In the first few days in Berlin I had one or two flashes of insight. When I was looking at rooms. Some small, some big, dark, elegant ones, and bright patriarchal ones. I was looking for something, but didn't know what; not a study, not a work-room, not a room for living, a room of the kind that might have been occupied before me by the person I would like to have become. It sounds so ridiculous, but it made me walk the streets for days. (Notebook 3, Oct. 4, 1903) 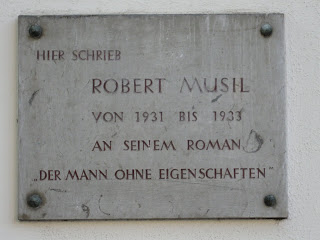 Roth lived at Kurfürstendamm 217 in 1925. He continued to live in the area into the early 1930's, including at the Hotel am Zoo, and worked on The Radetzky March in a nearby bar/café at Kurfürstendamm 15. One finds this plaque at the latter address: 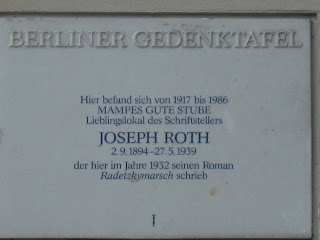 Update (July 6, 2011): I found an older picture (1950s?) of Kurfürstendamm 217 (the Musil-Roth residence) in Wilfried Berghahn's book Robert Musil. The building used to be 'Pension Stern'. Here it is: 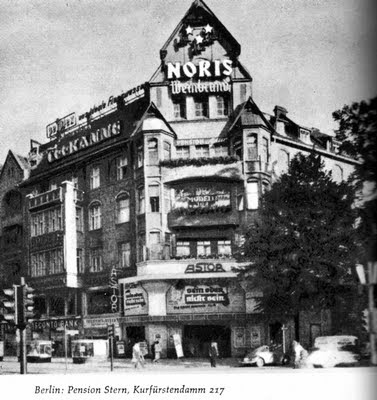 I have a friend of myself and a friend genuflecting to this plaque.