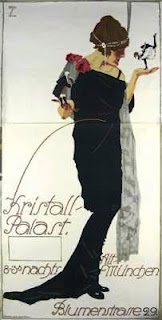 Schwabing lay at the heart of Munich's artistic creativity in the years before and after WWI. In about two minutes one can walk past the former Schwabing residences of Rainer Maria Rilke, Paul Klee, Wassily Kandinsky, and Karl Wolfskehl (a poet and playwright who belonged to Stefan George's circle). These artists all lived on Ainmillerstrasse and on Römerstrasse. By clicking on the next links, you can see my photos of Rilke's place, Klee's old building, Kandinsky's home, and Wolfskehl's place around the corner from them.

Kandinsky reminisced fondly about his days in Munich in a letter that he wrote to Hanna and Karl Wolfskehl on Nov. 6, 1926, in which Kandinsky recalls


the old times -- Ainmiller-Römerstrasse -- I still have in good memory. Those were in general good, exciting, hopeful times that promised more than has been realized till now. (Quoted from Peg Weiss's book, Kandinsky in Munich: the Formative Jugendstil Years,  p. 82)


Munich's creative ferment sustained many such interconnections across the arts, connections not just between individual talents but among whole creative circles as well. Kandinsky, for instance, was at the centre of the Blue Rider painters while Wolfskehl (the 'Zeus of Schwabing') belonged to the Kosmikerkreis (Cosmic Circle). There was also a musical influence on the Blue Rider, for Kandinsky was much inspired by the work of the Viennese musician (and painter) Arnold Schoenberg.

One surprise for me in reading about the creative milieu of Munich in the early 20th century is its long hidden connection to Canadian literature. One of the early Canadian novelists was Frederick Philip Grove. Apart from being a novelist, Grove turns out to have been an accomplished fabulist. He appeared in Manitoba in 1912, claiming to be from Russia. He became a teacher and eventually a principal, lived near the North Dakota border, and wrote stories about prairie life. It turns out that Frederick Grove, prairie storyteller, was really Felix Paul Berthold Friedrich Greve, a Prussian who had moved to Munich in 1901 and associated with members of Stefan George's circle (esp. Friedrich Gundolf). In Munich, Greve affected the mannerisms of Oscar Wilde, which apparently undermined Greve's attempt to ingratiate himself with Wolfskehl. Greve ran up a big debt, was sent to prison, faked his own suicide and moved to Kentucky and then Canada. [Correction (July 15): After Munich, Greve moved to Berlin and began a relationship with Elsa von Freytag-Loringhoven. She helped him to fake his suicide and followed him to America, but he parted company with her in Kentucky.] So, this seemingly somewhat boring old figure in Canadian, prairie literature turns out to have arrived here from the fin de siècle's hippie central in Schwabing, Munich.

Sources consulted (besides those mentioned above): München: Literarische Streifzüge by Margarete Graf; Only in Munich by Duncan J. D. Smith.
Posted by praymont at 7:18 PM

connections were numerous between Monte Verita and Schwabing where Graeser lived in the years before ww I and after ww II. See the book by Ulrike Voswinckel: Freie Liebe und Anarchie. (Free Love and Anarchy)Schwabing-Monte Verita. Entwürfe gegen das etablierte Leben (Projects against established Life). Munich 2009. Reflecting an exposition there. For more information see our website: www.gusto-graeser.info
Hermann

Thanks, Hermann. I didn't know that Graeser lived in Munich in two different periods of his life.