I've just returned from a trip to Germany. I visited Munich, Augsburg, Berlin, and Leipzig. I'll post on the cultural history of some of these places (in the way that I did on cafés in Vienna), with the focus on Munich, where I spent the most time.

Munich has much in common with Vienna. Both cities are predominantly Roman Catholic centres in which German is the main language. Both cities served as the home base for several Holy Roman Emperors and have the magnificent, old buildings to prove it. Both cities hosted a brilliant artistic culture in the late 19th and early 20th centuries, a culture that thrived in several cafés. And both cities included among their early 20th-Century inhabitants Lenin and Hitler.

Differences between Munich and Vienna are evident from the fact that Hitler disliked Vienna but loved Munich. He seems to have regarded Munich as his adopted home town (even though Vienna was the capital of his home country). Why did Vienna repel this monster while Munich attracted him? From what I can tell, Hitler hated Vienna's more cosmopolitan milieu. Also, Vienna showed more appreciation and support for its creative Bohemians (like Peter Altenberg) while Müncheners seem, for the most part, to have regarded their city's artistic, café culture with disdain and suspicion. This hostile stance reflects the incursion of rural and small-town Bavarian attitudes into the city, feeding a tendency in its inhabitants to be uncritical of tradition and to resent the apparently idle proto-hippies who challenged it. As Thomas Mann put it, Munich was 'the unliterary city par excellence. Banal women and healthy men – God knows what a lot of contempt I load into the word "healthy"!' (Quoted from p. 4 of Where Ghosts Walked: Munich’s Road to the Third Reich by David Clay Large)

Pro-tradition and against the shock of the new (esp. in the arts) -- it's no surprise that a man like Hitler would find such a setting more congenial than Vienna. However, it is an uncomfortable fact that Hitler himself affected the style of a café Bohemian. One of the things that drew him to Munich was its advanced status as a city for painters. After failing in Vienna, he found that he could support himself (for a brief time) as a postcard painter in Munich. He became an outsider Bohemian, a Bohemian in his lifestyle but a reactionary in art and politics, whose opinions in these areas were (even before WWI) more in line with the overall tone of Munich than that of Vienna. 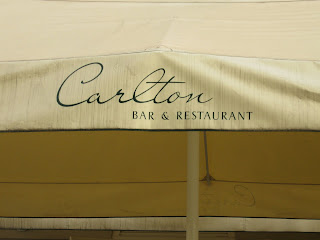 I don't know what (if any) connection it has to the Carlton Tea Room. It's in the courtyard of this building: 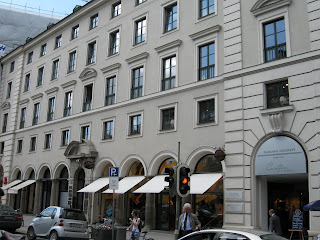 In his autobiography, The Turning Point, Klaus Mann describes his experience of observing Hitler in the Carlton Tea Room as follows:


It was at the beginning of 1932 that I spent half-an-hour or so watching him at a table just a few feet from mine. The Carlton Tea Room in Munich was one of his favorite places .... My main reason for going there was that the Café Luitpold, on the other side of the street, was crammed with SA men. ... I found him surprisingly ugly, much more vulgar than I had anticipated. ... He was flabby and foul and without any marks of greatness, a frustrated, hysterical petty bourgeois. It was a most unpleasant experience to have him so close to me, but at the same time it meant something like a relief. For I was positive that he had no chance to conquer Germany. 'He is not to be our dictator,' I felt with a sort of malignant satisfaction. 'You have no chance, silly little mustache. Don't fool yourself, Schicklgruber: you are a washout. Five years from now, nobody will remember your name ...' Was there no bloody aura around his head to remind me? No writing on the wall of the Carlton Tea Room?

A comprehensive summary of Munich's history at the centre of the Nazi movement can be found in this 51-page pdf on a German and Bavarian government site (cf. their site with an MP3 version).
Posted by praymont at 12:31 PM