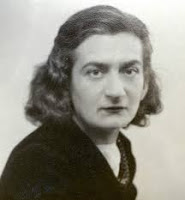 Rose Rand, who was born in Lemberg and moved to Austria, where she was a member of the Vienna Circle, and fled to England in 1939 with Susan Stebbing's help.

From the BBC: Raymond Tallis and Ray Monk on Wittgenstein (it starts about 57 seconds into the audio file). From the BBC in 2003, Melvyn Bragg interviews Monk, Barry Smith, and Marie McGinn about Wittgenstein.

Reshef Agam-Segal on 'thinking and willing subjects in the Tractatus'.

From last March, Lars Hertzberg on talking (non)sense about nonsense (good comment thread), and a follow-up (with further interesting comments).

Gavin Kitching on Rupert Read's Wittgenstein Among the Sciences.

'Why on earth is it so difficult to describe the Contents of my Consciousness?'

A. C. Grayling on 'Wittgenstein on Scepticism and Certainty'.

From Siris -- 'In Defense of Ordinary Language Philosophy'.

Last May and June, SOH-Dan put up several posts on Dummett's Frege, McDowell on cog-sci, and Sebastian Rödl on Kant's first analogy.

MWQ quotes a lengthy passage from Steven Tester's new translation of Lichtenberg. The quoted passage focuses on Lichtenberg's philosophy of mind. Here's one of my favourite passages from Lichtenberg; it's about the mind-body relation and seems to anticipate Ryle's 'ghost in the machine':


Long before we could explain the common phenomena of the physical world we ventured to explain them through the agency of spirits. Now [that] we know better how they are linked together we explain one phenomenon by means of another; but we nonetheless have two spirits left to us, a god and a soul. The soul is thus even now, as it were, the ghost that haunts our body’s fragile frame. (G. C. Lichtenberg, c. 1776; trans. R. J. Hollingdale)

The Stanford Encyclopedia finally has entries for Moritz Schlick and Heinrich Rickert. Still no entries for Sir William Hamilton, Wilhelm Windelband (who influenced not only Rickert and Max Weber but also Samuel Beckett), Georg Simmel, Susan Stebbing, Friedrich Waismann, Rudolf Carnap (!), Ruth Barcan Marcus (!), William Dray, Philippa Foot, Iris Murdoch, and Mary Midgley (though they're of course referred to in other entries). I don't mean this to be any strong criticism of the editors, who have likely already commissioned entries for many of the above-named figures. I know that the editors have launched an initiative to give more coverage to female philosophers.