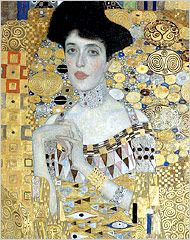 Three new Random House books are adorned by Klimt's art. First, there's Eric Kandel's new book: 'Kandel's key contribution to neuroaesthetics in The Age of Insight, Zeki says, is to focus on the work and milieu of three Austrian Expressionist artists: Klimt, Oskar Kokoschka, and Egon Schiele, all of whom Kandel has studied extensively and whose work he and his wife have collected since the 1960s.'

Next, also featuring on its cover the painting of  Adele Bloch-Bauer, is Anne-Marie O'Connor's book about that portrait, The Lady in Gold: The Extraordinary Tale of Gustav Klimt's Masterpiece, Portrait of Adele Bloch-Bauer. All Things Considered has a clip about this book.

Then there's Tim Bonyhady's book about his art-collecting, Viennese ancestors, Good Living Street: Portrait of a Patron Family, Vienna 1900, on the cover of which is Klimt's portrait of Hermine Gallia.

Guy Cunningham on the new English translation of Oliver Matuschek's biography of Stefan Zweig, and Miranda Seymour on the same bio in the Literary Review.

Anthony Heilbut reviews Joseph Roth: A Life in Letters (trans. & ed. by Michael Hofmann): 'If you want a high literary experience, to be rocked between emotional extremes by a writer with perfect pitch in any realm, you won’t do better than this collection of letters by an impoverished alcoholic, who died with two bedraggled suitcases to his name.' Daniel Johnson on the same collection in the Literary Review. From Stefany Anne Goldberg's review of Roth's letters: 'The fact that these people, like Zweig, continued their relationship with Roth, bearing the constant criticisms which came attired sometimes in white gloves, sometimes in vitriol, is both a testament to their devotion and to their position in Roth’s life as intimates he could keep at arm’s length.' Here's Philip Hensher's review; and Tess Lewis'; and Adam Kirsch's; and, finally, here's Michael Hofmann on his collection of Roth's letters: 'Still, I like the idea of a sort of accidental biography, told in the subject's own words, the sort of book that isn't nine parts starch, that is always medias in res, and that doesn't begin with a date of birth.'


Update (April 8): Jonah Lehrer interviews Kandel about Age of Insight. (ht Man Without Qualities) The above clip is the audio for Paul Holdengräber's interview with Kandel at the New York Public Library.

'Fin de siècle Vienna was, in the words of Jewish satirist Karl Kraus, a “research laboratory for world destruction.” Viennese playwright Arthur Schnitzler agreed; his play, Professor Bernhardi, was one of the first plays in German to confront the rising tide of anti-Semitism in early 20th-century Central Europe.'

Adele Bloch-Bauer from Sebastian Cosor on Vimeo.
Posted by praymont at 6:36 AM