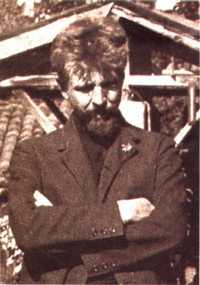 "Dear Jung, -- I climbed over the asylum wall and am now in the Hotel X. This is a begging letter. Please send me money for the hotel expenses and also the train fare to Munich. -- Yours Sincerely." (Ernest Jones, Free Associations: Memories of a Psychoanalyst, [p. 164])

This wonderful letter was sent by Otto Gross to Carl Jung shortly after Gross had left Jung's care. Gross was a brilliant young physician (a neurologist who worked with Emil Kraepelin) and early psychoanalyst who conducted many of his analyses in Schwabing's Café Stefanie. He at times resided in the early hippie haven, Monte Verità. In my post on that settlement, I noted its similarity to the 1960's counterculture. One missing element, it seemed, was the experimentation with drugs. Well, it wasn't missing when young Otto arrived. As a physician, he had access to drugs, and he did more than just experiment with them. In fact, among the ills for which Jung was treating him at the Burghölzli clinic were addictions to cocaine and morphine.

Gross' brilliance is attested by Freud's biographer, Ernest Jones, who met Gross in Schwabing. Jones says, "[Gross] was the nearest approach to a romantic genius I ever met .... He was my first instructor in the technique of psycho-analysis .... Such penetrative power of divining the inner thoughts of others I was never to see again." (Ibid., pp. 163-4)

Gross was a prototype of the young punk rebel. The focus of his rebellion was the constricting, martial culture of German-speaking central Europe. The point of his rebellion is captured by Sam Whimster and Gottfried Heuer, who say that Gross'


central insight was that it was not fathers alone ... who formed the repressive structure of personality in their children but that instead it was the structure and culture of a patriarchal society that had institutionalized repression in the family. His solution was to call for an expressive and unrestrained sexuality, which the unique conditions of Schwabing had shown to be possible. ('Otto Gross and Else Jaffé and Max Weber', Sam Whimster and Gottfried Heuer, Theory Culture Society [1998] 15: 129)

Indeed, it was Gross who coined the phrase "sexual revolution" (or its German equivalent).

So, for Otto the political was very personal. This brought him into conflict with Freud, who resisted efforts to link a political program to psychoanalysis.

The fusion of personal and political themes in Gross' life is especially clear in connection with his father, Hans Gross, an influential early criminologist (whose classes Kafka attended). Hans was the very opposite of Otto. Hans thought that 'degenerates' (e.g., vagabonds and revolutionaries -- e.g., his son) who didn't respond to treatment should be sent to Africa. Hans studied and tried to develop more effective forms of incarceration, including the concentration camp.

So, it's easy to sympathize with Otto Gross in his conflict with his father. Still, Otto was schizophrenic and did great harm to others. For instance, he was wanted by the police in Switzerland because of his role in the deaths of two women -- one an assisted suicide (Lotte Hattemer in 1906), the other a death by overdose (Sophie Benz in 1910). Also, he took no, or little, responsibility for his four children, as is indicated by the fact that both his sons (born in 1907 to different women) were named 'Peter'. He took no role in their naming.

It seems that Otto, though he meant well, didn't know what 'well' meant. It's not entirely surprising, then, that his father tried to have Otto committed to an institution. Hans succeeded in having Otto arrested in Berlin on Nov. 9, 1913. Otto was sent back to his homeland, Austria, and confined there in asylums at Tulln and Troppau. This father-son conflict became a cause célèbre, prompting Blaise Cendrars and Apollinaire (among others) to oppose in print the father's incarceration of the son, an act that became emblematic of a generation's wider conflict with the patriarchy


The battle of the Gross's, père et fils, resonated with Kafka and engendered his generally sympathetic response to Otto Gross' ideas. Indeed, Hartmut Binder and others have claimed that the conflict fed Kafka's conception of The Trial. Still, it's difficult to find evidence of any influence by Gross on Kafka, and some authors deny that there was any (see, e.g., Jennifer E. Michaels, Anarchy and Eros: Otto Gross' Impact on German Expressionist Writers [NY: Peter Lang Publishers Inc., 1983], p. 164). As was noted (above), Hans Gross was one of Kafka's professors. In fact, according to Martin Green (Mountain of Truth: the Counterculture Begins Ascona, 1900-1920 [Hanover: University Press of New England, 1986], p. 40), "Kafka had sat under Hans Gross for sixteen class hours a week in his fifth, sixth, and seventh semesters of law at Prague University." Shortly after he graduated, Kafka met Otto Gross briefly in 1907 (although only the linked source reports that encounter). Later, in 1917, Kafka and Gross met at least twice, first on a night train from Budapest to Vienna (or from Vienna to Prague -- sources differ here) and later in Prague. Of the meeting on the train, Henrik Jensen says (pdf), "Kafka was with Gross ... listening to his meanderings, afterwards claiming that he had not understood a word. Still, he did see something 'essential' beyond the ridiculous, as he later stated in a letter to Milena Jesenská." Here's an excerpt from Kafka's letter (as quoted in a paper by Gottfried Heuer):


I have hardly known Otto Gross; but I realised that there was something essential here that at least with its hand reached out of the "ridiculous." The perplexed frame of mind of his friends and relatives (wife, brother-in-law, even the enigmatically silent baby amongst the travelling bags ...) was somewhat reminiscent of the mood of the followers of Christ as they stood below him who was nailed to the cross.

(The 'wife' was actually Gross' mistress, Marianne Kuh, and the 'brother-in-law' was her brother, Anton Kuh.) Later in 1917, Gross met in Prague with Kafka, Franz Werfel, Max Brod, and others to discuss a new journal in which Kafka showed interest. It was to have been called the Journal Against the Will to Power. Also, Martin Green reports (Mountain of Truth, p. 40) that Kafka read all of the articles that Gross had published in a journal called Die Aktion. Finally, in 1922, three years after Gross' death, Kafka severely criticized Werfel for casting Gross in a bad light in his play called Schweiger, in which the loathsome character of Dr. Ottokar Grund was made the spokesman for Gross' ideas (according to Peter Stephan Jungk, Franz Werfel [NY: Grove Weidenfeld, 1990], p. 92).


Otto Gross had direct or indirect connections with many other famous people -- Max Weber, D. H. Lawrence, Gustav Landauer, etc. -- but one of these in particular stood out for me. One of Gross' followers was Heinrich Goesch, who befriended Paul Tillich and (rather more intimately) his wife, Hannah Tillich. (That last link is to an article about his parents by René Tillich -- highly recommended. It even mentions a trip to Lake Ascona, near Monte Verità.) According to Martin Green (Mountain of Truth, p. 192), the Tillichs were receptive to many of Gross' ideas, as mediated by Goesch.

Update (Nov. 27, 2011): In a NY Times review of David Cronenberg's film A Dangerous Method, Otto Gross is described as, "A fellow analyst, sent to Jung by Freud, who turns out to be a feral and charming emanation of pure id, an imp of the Freudian perverse."
Posted by praymont at 2:12 AM