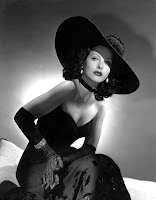 NPR interviews Richard Rhodes about his new book, Hedy's Folly: The Life and Breakthrough Inventions of Hedy Lamarr, the Most Beautiful Woman in the World.

An excerpt from Umberto Eco's The Prague Cemetery. A review of Eco's book by Scott Kelly in the Scotsman, and one by Benjamin Balin in Haaretz: 'Conspiracy theories and intense historical settings are Umberto Eco’s forte, and here he turns his attention to one of history’s most persuasive and destructive false texts - with mixed results.'

'[Rosa] Mayreder’s title alone reads as a challenge to [Otto] Weininger’s ... woman-hating bestseller Geschlecht und Character (1903), a title rendered as Sex and Character in English but that should really be translated as Gender and Character. Mayreder took a position against Weininger in her earlier A Survey of the Woman Problem [c. 1913] as well, a position she developed further in Gender and Culture [1923] to explain misogyny in Western culture as a historical phenomenon which she based on an abhorrence of the body and sexuality that had grown out of Christianity.'

'Had [Czeslaw] Milosz been there, said [Artur Sebastian] Rosman, he might have repeated his claim that his readers don’t “take into account a particular, quite fundamental fact: all my intellectual impulses are religious and in that sense my poetry is religious”.'

From Astra Scheib's interview with Thomas Bernhard: 'I also cannot bear people applauding. Applause - actors are paid in such a way. They earn their money in such a way. I like it when the money from my publisher arrives on my account. But marching music, hosts of applauding people in the theater or in the concert -- I can't bear that. Nothing but disaster follows from applause.'


A great piece on Bernhard from last January by Richard Crary.

No great fan of Bernhard's, Peter Handke is interviewed by Cecilia Dreymüller. (I hadn't realized that Handke converted to the Orthodox Church.)

Iain Bamforth reviews a German biography of Kleist: 'Having locked himself up for a week with Kant’s Critique of Pure Reason, he despaired of the self’s inscrutability – it could only be seen “through green glasses”.'

'The Beastly Péter Nádas: Why you need to read the massive novels of this NSFW Hungarian writer'.

'Angelo Soliman is probably best known in his fictional incarnation as the disgraced African servant boy in The Man Without Qualities, Robert Musil’s novel about the end of the Austrian monarchy. Soliman ... arrived in Austria as a slave from western Africa, where he was born in 1721. ... He acted as a soldier and adviser in one princely household and then came to Vienna in 1753 to serve as a valet and tutor in another.'

Franz Cede compares the fall of the Habsburgs to that of the Soviets.