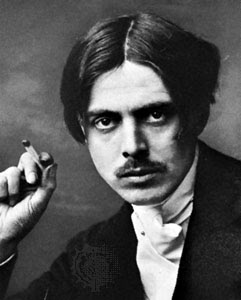 Walrus Magazine has an intriguing article about Wyndham Lewis, an unlikeable English writer and artist who, sadly, was born in Canada. 'Sadly' for him, since he despised Canada (especially Toronto), and 'sadly' for us, since he was a racist and anti-Semite, which is clear from his political tracts in the 1930's. Indeed, of all the literary and visual artists whose sense of judgment was impugned by their political allegiances in that 'low dishonest decade,' it's hard to imagine anyone who was as thoroughly discredited as Lewis, whose 1932 book on Hitler included a chapter called 'Adolf Hitler a Man of Peace'. To his credit, Lewis did at least come to oppose the Nazis (shortly before WWII).

It says a lot about Toronto in that era that when Lewis lived there during the war, he (bigot though he was) came to detest the city for its intolerance. That is one theme of the Walrus piece that did not surprise me. European intellectuals seldom had much good to say about 'Toronto, the good' before the 1960's. Another Englishman who spent some time in Toronto during the war was A. J. Ayer. He was learning how to kill a man 'with his bare hands' (according to his autobiography) at a secret spy school east of the city. He characterized the Toronto of that time as a 'cold, Scots Calvinist town.' Actually, according to what I've heard, the northern Irish did more to shape Toronto's Calvinist ethos than the Scots did (which might explain why the Belfast of Brian Moore's Lonely Passion of Judith Hearne seemed so familiar to me).

(This Irish Protestant influence was more pronounced in eastern Ontario, where the Orange Lodge still operates, and one can find an Orange Hall in several towns [such as Peterborough].)

A surprising discovery for me in the Walrus article was the revelation of Lewis's strong influence on Marshall McLuhan, as is attested by a 1967 interview in which McLuhan credits Lewis with the insight that 'the man-made environment is ... a programmed teaching machine.' Here's an excerpt:

A long time ago, I actually read Childermass, the first book of Lewis' "The Human Age" trilogy and remember thinking it was quite good. Them being ex-Nazi enthusiasts hasn't stopped me from appreciating Celine or Knut Hamsum. Of course, in Lewis' case he was in Canada and should have known better.

Thanks, Tony. I'll have to look up that title. I haven't read any of Lewis's novels, but Tarr is on my to-read list. Many years ago I read parts of Lewis' Time and Western Man, but I can't remember much about it. The book that influenced McLuhan, America and Cosmic Man (Lewis did go in for grandiose titles), also looks like it's worth a closer look.