Louis MacNeice on the net 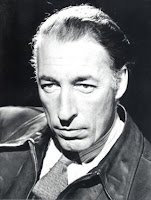 Louis MacNeice, whose reading of 'Prayer Before Birth' you can hear at the Poetry Archive. His letters were published this summer by Faber and are reviewed by David Wheatley in the TLS and by Roy Foster in the Financial Times (and by Robert Giddings in Tribune). Here's a nice, long review of MacNeice's Collected Poems by Maria Johnston. (Other reviews and excerpts are complied here.)

MacNeice's admirers include Michael Longley, Derek Mahon, and Jon Stallworthy (MacNeice's biographer). You can hear Stallworthy, as well as Paul Muldoon and others, speaking about MacNeice in the mp3's gathered at this conference site. And, while Denis Donoghue's LRB article on MacNeice (1987) is behind a pay-wall, you can read the subsequent exchange of letters in that periodical between Donoghue, Edna Longley, Peter McDonald, and Jonathan Allison.

Some of MacNeice's poems have quite a musical quality, especially 'Bagpipe Music', the first of his poems that I read. Here's a recital of it:

After WWII, MacNeice worked for the BBC, where (among other things) he wrote radio plays. Of these, the most prominent seems to be the 1946 play Dark Tower, which has been published by Faber (along with some other scripts). Britten wrote the music for Dark Tower. The play was based on Robert Browning's poem, 'Childe Roland to the Dark Tower Came' (which drew its title from a line in King Lear). I wish I could find a recording (audio or video) of this play. It sounds interesting.

When books have all seized up like the books in graveyards
And reading and even speaking have been replaced
By other, less difficult, media, we wonder if you
Will find in flowers and fruit the same colour and taste
They held for us for whom they were framed in words,
And will your grass be green, your sky be blue,
Or will your birds be always wingless birds?

Finally, here's a nice clip from a series produced by Optic Nerve for the BBC, in which Tom Paulin, Kate Clanchy and Jamie McKendrick read and discuss 'Prayer Before Birth':

The Henri is Henri Bergson.

Hi ombhurbhuva -- Sorry I didn't see and moderate your comment earlier so I could save you the trouble of re-posting it (the re-post is the deleted comment, above). Your blog looks interesting. I'm adding it to my feed.