This ad for Army Club Cigarettes adorned an old Penguin paperback. The bottom caption reads, "This is the cigarette for the fellow with a full-size man's job to do. When you're feeling all 'hit up,' it steadies the nerves."

Beginning in the late 1930's (but before WWII), Penguin's books contained ads for products other than the publisher's own books.

Here's another commercial, this time for Euthymol ('the refreshing antiseptic toothpaste'), which appeared in William Temple's Christianity and the Social Order: 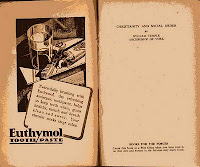 This same Euthymol commercial adorns the inside of the back cover of Volume 1 of John Lehmann's justly celebrated series, The Penguin New Writing, a volume that includes Orwell's 'Shooting an Elephant', part of Isherwood's Berlin Diary and V. S. Pritchett's 'Sense of Humour'.

Getting back to William Temple, he was the Archbishop of Canterbury, as is indicated near the back of Christianity and the Social Order in his bio, which competes for attention with a Craven A commercial: 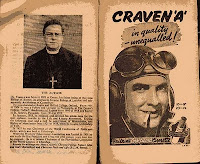 One of Penguin's more lucrative clients must have been Cadbury's (the company seems to have dropped the 's' from its name), which was marketing its chocolates as food:

Another reliable client was Pears, maker of soap (the "original transparent soap") and shaving accessories:

The shaving product commercial is on the back cover of Chekhov's Three Plays. I'm not sure where the soap ad ('Feel its tonic action') is from. I scanned that image last year when I posted some of this material on my old Chapters site (long since deleted), and -- here I will confess to an act that is unforgivable in the eyes of some -- I discarded that old Penguin. Yes, I sometimes chuck a particularly beat-up old Penguin into a recycling bin. I do so without remorse and occasionally with glee. Anyhow, a similar Pears soap ad is on the back of Volume 5 of The Penguin New Writing series. The crest at the top of the soap ad is the Royal coat of arms. The caption under it reads, "By Appointment to H. M. [His Majesty] The King."

That fifth volume has this next ad for Huntley & Palmers biscuits (a company with an interesting history) on the inside of its front cover:

Finally, on the back of Volume 6 we find this commercial for Norvic Shoes:

I don't know when Penguin stopped running commercials of this sort in its books. Those who wanted to purchase advertising space in a Penguin were advised to direct their enquiries to E. W. Player Ltd. at 61 Chandos Place in London. Unlike most of the above companies, Player seems not to exist any longer. (The most recent mention of them that I can find via Google is from 1980, when they were located at 30 Fleet Street.)

A nice touch in the wartime Penguins is this note (usually found near the backs of these books):

"For the Forces. Leave this book at a Post Office when you have read it, so that men and women in the services may enjoy it too."
Posted by praymont at 6:58 AM