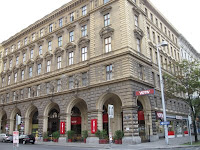 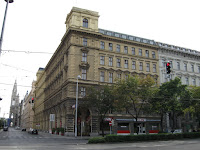 These two photos are of the building in Vienna in which the Cafe Arkaden was located. It's across the street from the Votivkirche. Today, this space is occupied by the Votiv Cafe.

The Arkaden was patronized by members of the Vienna Circle. Here's a relevant description from Wittgenstein in Vienna by Allan S. Janik and Hans Veigl ([New York: Springer, 1998] p. 188): "[Kurt Godel] sat frequently with [Rudolf] Carnap in this cafe, which was in the arcaded building built in 1883 ... opposite the university's stately old main building. ... We even see in Carnap's notebook: '[...] In the morning Arkadencafe. Discussion: Godel on propositions of language. Feigl, Waismann, [Marcel] Natkin present (30.11.1928).'"

Members of the Vienna Circle also frequented the Cafe Josephinum. I walked right past its old site without realizing it, which is strange since the same building housed one of Godel's apartments, and his old residences in Vienna have plaques indicating his residency. The building is still there, but is now the Hotel Atlanta (address: 33 Wahringerstrasse). In the 1920's this rather plain-looking structure was an apartment building. Among its residents (from October 1927 until July 1928) were the brothers Kurt and Rudolf Godel (according to John Dawson, Jr. in his biography, Kurt Godel [Logical Dilemmas, p. 33]).

The Cafe Josephinum makes an appearance at the beginning of Janna Levin's novel, A Madman Dreams of Turing Machines: "At the centre of the Circle is a circle: a clean, round, white marble tabletop. They select the Cafe Josephinum precisely for this table. ... The first mark is made, an equation applied directly to the tabletop, a slash of black ink across the marble..." (A Madman Dreams of Turing Machines by Janna Levin, p. 8).

Another hangout for members of the Vienna Circle was the Cafe Reichsrat (also no longer in existence). In this cafe Alfred Tarski met with Godel on the former's visit to Vienna. The Reichsrat is also notable for being the first place where Godel presented some of his incompleteness results. This is according to John W. Dawson, Jr., who writes, "Specifically, on August 26, 1930, Godel met Carnap, Feigl and Waismann at the Cafe Reichsrat in Vienna, where they discussed their travel plans to Konigsberg. Afterward, according to Carnap's [diary] entry for that date, the discussion turned to 'Godel's Entdeckung: Unvollstandigkeit des Systems der PM; Schwierigkeit des Widerspruchsfreiheitbeweises.' Three days later another meeting took place at the same cafe. On that occasion, Carnap noted 'Zuerst [before the arrival of Feigl and Waismann] erzahlt mir Godel von seiner Entdeckungen'" (quoting from Dawson's article, 'The Reception of Godel's Incompleteness Theorems', PSA, vol. 2 (1984): 253-71).

Cafe Reichsrat is hard to locate, partly because the street name has been changed (from Reichsrat to Rathausplatz). According to Matthias Baaz, the old cafe's site is now occupied by the Konditorei Sluka. I wasn't sure about this at first, since the Sluka itself dates from 1891 (it was mentioned in a play by Thomas Bernhard); but it looks like the Sluka expanded at some time into the Cafe Reichsrat's location. Compare this photo of the Reichsrat's door to this picture of the Sluka's patio. The door under the window in the background of the latter shot (towards the right, behind the lamp) appears to be the same door that appears in the old Cafe Reichsrat picture. More pictures of the Sluka are available at Merisi's Vienna For Beginners.

I wonder if Cafe Reichsrat was owned by Walther Mayer. Mayer was a Privatdozent in mathematics at the University of Vienna, and he later moved to Princeton University as Albert Einstein's assistant. Mayer owned a small cafe near the university. According to Maria Rentetzi (in her article 'The City as a Context for Scientific Activity', Endeavour 28 [March, 2004]), Mayer's cafe was across the campus from the Schottentor cafe, which could put it near the Rathaus. However, Retentzi adds that Mayer's cafe was near the Institute for Mathematics, the current location of which is far from the Rathaus.

Update (Aug 23, 2008): The math institute in Vienna seems to have had the same location when the Vienna Circle was meeting. Karl Menger says, "The meeting place of the Schlick Kreis was a rather dingy room on the ground floor of the building in the Boltzmanngasse that housed the mathematical and physical institutes of the University." (quoted from Friedrich Stadler's The Vienna Circle [Springer, 1997], p. 204 -- Stadler's book includes a photo of the entrance to the math seminar room where the Vienna Circle met)

Update (Sept. 11, 2008): I just bought Kurt Godel: Das Album/The Album (Karl Sigmund, John Dawson and Kurt Muhlberger), a bilingual book with many photos of Godel's old haunts, associates, etc. On p. 27 of this book, there is a picture of the interior of Cafe Josephinum, accompanied by the following description: "The ground floor of Godel's apartment house was occupied by the Cafe Josephinum, which was frequented by students and academics and hosted the post mortem discussions following scientific talks." The authors add that in addition to this cafe, members of the Vienna Circle liked to visit the Arkaden, the Reichsrat, Cafe Central and Cafe Herrenhof. The book also includes a picture of the Reichsrat's main doorway (to which I linked above) on p. 32.

Hi Paul,
I stumbled upon your post here while searching for coffee houses frequented by the Vienna Circle. I'm a Canadian/American philosopher and economist traveling through central and eastern Europe and I'm in Vienna at the moment. I thought it would be fun to try to find out where some of the great thinkers of turn of the century Vienna hung out. It seems as though Google believes you are the authoritative source on this topic! In any case, do you happen to know if any of these coffee houses still exist in their form from those days? I'd love to track one down and take a photo there.

PS. Please feel free to message or connect with me online if you are interested in discussing directly.

Hi Graham - I don't think any of Godel's preferred cafes have survived. They were all very close to the University of Vienna's campus. (See my later post: http://praymont.blogspot.ca/2014/08/cafes-reichsrat-and-arkaden.html .) The positivists (esp. Neurath) frequented the Cafe Herrenhof (at Herrengasse 10). The old cafe of that name ceased operations, but a new Cafe Herrenhof has opened at the old location. Two old cafes that seemed to be in good form (with their original designs) are the Cafe Museum (at the corner of Friedrichstraße 6 & Operngasse 7), which was designed by Adolf Loos, and the Cafe Sperl (at Gumpendorfer Straße 11). Mahler and Werfel liked the Sperl. There's an entry on the Sperl in Wikipedia (English version), and there's a German site with some info about it: http://www.planet-vienna.com/spots/sperl/sperl.htm