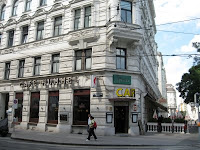 "As to the Parsifal, while it was generally known as the coffeehouse favoured by members of the philharmonic orchestra ... there also sat -- in a reserved niche at a table usually strewn with newspapers -- Karl Kraus" (whose tirade against the Young Vienna authors provoked a physical assault by Felix Salten) (Friedrich Torberg, Tante Jolesch, or the Decline of the West in Anecdotes [Ariadne Press, 2008; 1st published in German in 1975]). The Parsifal was in this building on the northeast corner of Josefstadter Strasse and Albert Gasse, which has been home to the Cafe Hummel since 1936.