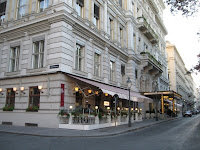 I wasn't much interested in Cafe Imperial. It seemed to be just an extension of a ritzy hotel, so I didn't even venture inside. Too bad, since it turns out to have a very interesting history.

First, Elias Canetti gives a mean-spirited anecdote about his meeting there with Stefan Zweig. I don't believe this anecdote to be accurate -- Canetti's autobiography is not that reliable, especially when he's talking about someone he didn't like. He evidently didn't like Zweig. Here's the relevant quotation:

"Soon after my return I ran into [Stefan] Zweig at the Cafe Imperial. He was sitting alone in one of the back rooms, holding his hand over his mouth to hide the absence of teeth [due to dental work]. Though he did not like to be seen in that condition, he beckoned me over to his table and bade me be seated. 'I've heard the whole story from Broch,' he said. 'You've met Joyce. ... Get Joyce to write a preface. Then your book will get attention.'" (Elias Canetti, The Play of the Eyes, p. 186)

Cafe Imperial also appears in Robert Musil's Diaries, but (again) Musil doesn't have much of interest to say about a cafe: "Yesterday, or the day before yesterday, spent some time with Morgenstern in the Cafe Imperial." (Robert Musil, Diaries, entry for March 26, 1930, p. 366)

More interestingly, Ludwig Wittgenstein met at this cafe with Ludwig von Ficker during the latter's visit to Vienna (so that Wittgenstein could give away part of his family's fortune to worthy artists under Ficker's guidance). Here's Ficker's description of a meeting with Wittgenstein on July 24, 1914:

"We met in Cafe Imperial, where there ensued a somewhat strenuous, but positively stimulating conversation between [Ludwig Wittgenstein] and the hard-of-hearing builder [Adolf Loos] on the still contoversial Haus am Michaelerplatz on questions of modern architecture, which seemed to interest Wittgenstein." (Ludwig von Ficker describing a meeting on July 24, 1914 at Cafe Imperial; quoted from Wittgenstein in Vienna, Allan S. Janik & Hans Veigl [Springer, 1998], p. 123)

The cafe in the Hotel Imperial was initially called Cafe Frohner. It's mentioned by Fritz Wittels, a med student and budding psychoanalyst in Freud's circle. According to Edward Timms, Wittels was also part of Karl Kraus' circle in 1907-08. Timms summarizes Wittels' description as follows:

"Later they [Kraus and Wittels] would go on to the Cafe Frohner, situated in the luxurious Hotel Imperial. Kraus was a heavy smoker, but never took a drop of alcohol. He was a gifted conversationalist and on good days, Wittels recalls, he enchanted everyone. All kinds of people -- senior government officials as well as artists, actors, and attractive girls -- would come to his table; and Kraus made them feel they were the 'centre of the universe'. Later, feeling the need to escape from the stifling atmosphere of bourgeois coffee houses, Kraus and his circle would move on to lower-class cafes patronised by prostitutes and bookies." (Edward Timms, 'The 'Child-Woman': Kraus, Freud, Wittles, and Irma Karczewska', in Vienna 1900: from Altenberg to Wittgenstein, ed. E. Timms and R. Robertson [Edinburgh University Press, 1990], p. 88)

Cafe Imperial was favoured by musicians; Mahler was a regular, as were Schonberg, Berg and Webern. According to Janik and Veigl, the Imperial was also visited by Freud, Hofmannsthal, Werfel, Rilke, Bruckner, Wagner, Brahms and Trotsky -- which raises a question: Is there a Viennese cafe from Trotsky's time in the Habsburg capital in which he did not luxuriate, excogitate or vegetate?

Update: I just read that Stalin was in Vienna briefly in early 1913 with Lenin, Bukharin and Trotsky. I can't find evidence that Stalin frequented any cafes. In his excellent Stalin biography, Simon Sebag Montefiore reports that Stalin, like Hitler, liked to take walks in the park around the Schonbrunn Palace.

Montefiore quotes Trotsky's description of his first encounter with Stalin: "I was sitting at the table beside the samovar in the apartment of Skobelev ... in the ancient capital of the Habsburgs [...] when suddenly the door opened with a knock and an unkown man entered. He was short ... thin ... his greyish-brown skin covered in pockmarks ... I saw nothing in his eyes that resembled friendliness [...] Then, as silently as he had come, he left, leaving a very depressing but unusual impression on me." (Simon Sebag Montefiore, Young Stalin [Weidenfield & Nicolson, 2007], p. 275)
Posted by praymont at 1:24 PM

Fascinating. I love the Stefan Zweig reference even if it may not be totally authentic

Thanks for visiting mine Paul, Yes, there are quite a few references in Helen Rappaport's book to Vienna, but no accounts of Lenin visiting the city. Trotsky was there for a while, but not Lenin as far as I can tell.

Your comparison with Freud is interesting - I know little about him.