Fact-Opinion 11, Against epistemic conceptions of fact

I've written before about epistemic conceptions of fact, according to which the first word in the phrase 'established fact' is redundant. These conceptions define 'fact' in such a way that a fact must already be established, verified, or known by (at least) some community of experts.

Here are three examples of recent, epistemic definitions of 'fact':

First, there's this definition in a psychological dictionary:

Next, there is the definition that Justin McBrayer quoted in his contribution to the New York Times (March 2, 2015), according to which something can be a fact only if it 'can be tested or proven' (McBrayer, 'Why Our Children Don’t Think There Are Moral Facts', New York Times [March 2, 2015]).

Finally, I obtained (from a source in California) this image of teaching material for a Grade 6 class: 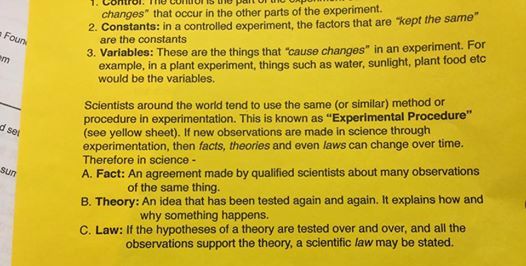 'Fact' is here defined in terms of a consensus among the relevant experts. In this case, the definition requires that a fact be believed (or agreed to) by qualified scientists but doesn't strictly entail that this agreement on the facts should rise to the level of knowledge. Still, given the context, agreement among qualified scientists seems to be what grounds knowledge. (I'll leave aside the difficulties in the conceptions of theory and law in this image.)

I'm baffled by these epistemic conceptions of fact. Surely, it makes perfectly good sense to say, 'We don't know all the facts,' where 'we' refers to all of humanity. That is, there remain facts about our world no one yet knows. But if we adopted an epistemic definition of fact, then any such expression of epistemic humility would involve a self-contradiction; for, given an epistemic definition, the statement that 'Humanity does not yet know all the facts' would be equivalent to saying, 'Humanity does not yet know all the known facts.'

Not only do these epistemic definitions render a perfectly sensible claim self-contradictory, but they are inimical to the continued progress of science; for they nullify a primary reason for continuing to pursue scientific investigation. There would be little need, if any, to pursue science if humanity were already in possession of all the facts about the world. The continued pursuit of science presupposes that we don't know all the facts. It assumes that there remain facts about our world and its workings that continue to elude us -- all of us (even the qualified scientists).