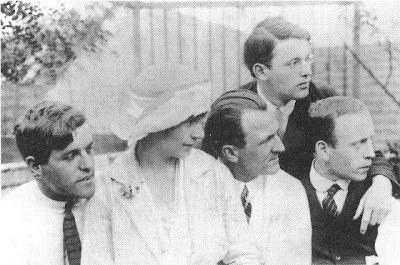 In this 1922 photo are (from left to right): Wieland Herzfelde, Eva and George Grosz, Rudolf Schlichter, and John Heartfield.

A new collection of papers on Weimar culture from Princeton University Press: Weimar Thought: A Contested Legacy. In includes an article by Frederick Beiser on the neo-Kantians. Here's the Table of Contents with abstracts for each paper.

Eileen Battersby reviews Erich Kästner's Going to the Dogs: the Story of a Moralist.

Friedhelm Greis on Tucholsky. More Tucholsky: 'In Berlin, Kurt Tucholsky discovered his stage, he wrote the lyrics for revues and literary cabarets - honed, polemical texts with a shot of ribald humor. His first record appeared, a shellac treasure with the song "When the Old Motor Ticks Again." It was a massive hit.'

Entries on Tucholsky and others at Berlin: The City as Body, The City as Metaphor, which is the site for a course at Stanford University.


If the two novels she published in the twilight era of the Weimar Republic turned her into a literary star, then the Nazi ban led to her being forgotten for a very long time. Only near the end of her days was she rediscovered and the recipient of widespread recognition. ... "Doris may be a refreshing character - funny, charming and very human," continues [Hanan] Elstein. "But she also embodies the ignorance, systematic blindness and apathy - blinded by the materialistic plenty and the lack of political awareness that aided the rise of the Nazis in 1933."

Recordings of George Mosse's 1979 lectures for a course called 'European Cultural History: 1880-1920'. The lectures that begin with Lecture 23 seem to focus on Weimar.

Historical Dictionary of the Weimar Republic.