(Source)
The western Ukrainian city of Lviv has an impressive and complex legacy. It began the 20th-Century as Lemberg, an Austro-Hungarian outpost in the eastern reaches of the Habsburg domains. Between the world wars it was Lwów, a city in the southeastern corner of Poland. After WWII it was Lvov near the western frontier of the Soviet Union. Since 1991, it has been Lviv near the western edge of Ukraine.

Ethnic diversity was long a hallmark of the city. By the middle of the 1500's, five ethnic groups each accounted for at least 5% of Lviv's population. These groups were Polish, Ruthenian (western Ukrainian), German, Jewish, and Armenian. [Source: 'Lviv: a Multicultural City Through the Centuries' [pdf] by Yaroslav Hrytsak.] The city's environs included many Ruthenian, Jewish, and German (inc. Mennonite) villages. Here are several old maps of the city.

In its Habsburg days, Lemberg took shape as a 'little Vienna'. It was the capital city of the Austro-Hungarian crownland called (rather grandly) the Kingdom of Galicia and Lodomeria. As a provincial capital, Lemberg became a home for some lesser members of the Habsburg bureaucracy. For instance, Arthur Edler von Mises, an official in the Austrian state railway, spent part of his professional life in Lemberg. Both his famous sons, Ludwig and  Richard, were born there. So was Alexius von Meinong, whose father was a major general in the army. And then there's Leopold von Sacher-Masoch, born in Lemberg in 1836. His father was the chief of police. 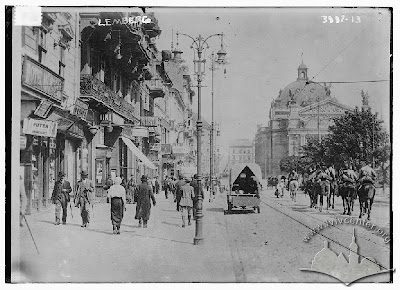 Like the Viennese, the residents of Lemberg (Leopolitans) invested much in their university, a respectable, primarily undergraduate school and 'feeder' to the graduate and professional programs in Vienna. Lemberg University, which became Jan Kazimierz University in the interwar years, was the initial home of the Lwow/Warsaw School of logicians and philosophers. The members of this school who spent the most time in Lwów between the wars were Kazimierz Twardowski and Kazimierz Ajdukiewicz. Other members of the school were there in their student days. That includes Jan Łukasiewicz, who was born and habilitated in Lemberg (his father was an army captain).

Łukasiewicz worked with the Lvov mathematicians, an impressive group whose members were based at the city's main university and at the local polytechnic. These mathematicians followed the Viennese habit of working and socializing at a café. Their favourite hangout was the Scottish café (in Akademicki Square), where they would write their mathematical problems and solutions on the marble tables. Here's a nice description of them and their café. Among the mathematicians in question were Stefan Banach, Wladyslaw Orlicz, and the Lemberg natives Stanislaw Ulam and Stanislaw Mazur.


The medical sciences were also well represented at Jan Kazimierz University. Researchers there included Jakub Parnas, Rudolf Weigl, Boleslaw Popielski, and Ludwig Fleck. The last two were born in Lemberg. Also, the first female physician in Austria-Hungary had her practice in Lviv (though she trained in Zurich).

Lviv natives who distinguished themselves outside the mathematical and physical sciences include Solomon Buber (whose grandson Martin spent ten years of his childhood in Lemberg), Nahum Glatzer, Leopold Staff, Stanislaw Lem, Zbigniew Herbert, Adam Zagajewski (one of whose poems is 'To Go to Lvov'), Ivan Franko, and Józef Wittlin (whose 1946 memoir of life in Lvov has been translated into German and Spanish but not English).

While the Ruthenians tended to live in the rural areas around the city, there were several Ruthenian Leopolitans besides Ivan Franko who distinguished themselves in the literary and other arts: Vasyl Shchurat, Volodymyr Hnatiuk, Ivan Trush, Stanyslav Lyudkevych, and the opera divas Olena Kulchytska and Solomiya Krushelnitska. Finally, there's Lubka Kolessa, an excellent Ukrainian pianist who emigrated to Canada.

A diverse university town with flourishing arts and sciences, philosophy and opera -- Lviv was a very civilized little city. But here civilization met the depths of savagery. As James Meek has said, 'Few places have been the nexus of as much evil as Lviv station.' Lviv lay in the bloodlands. It experienced the Holocaust and was only a little to the west of where the Holodmor occurred in the early 1930's. (It is alleged that a 'lesser known chapter of the Holodmor' happened in Lviv in the late 1940's).

But violence descended on Lemberg before the horrors of the 1930's and 40's. In the roughly twenty-five years following 1913, there were at least four battles named after the city. There were several battles in Lemberg's environs in 1914, when the Russians took the city, followed by the Battle of Lemberg (1915), when the Austro-Hungarians and Germans took it back.
The end of WWI brought only more violence. Amid the collapse of the Habsburg order there was a pogrom near the end of 1918, which happened during the Polish-Ukrainian War (1918-19), which featured another Battle of Lemberg (1918). Then there was the Polish-Soviet War, which included a Battle of Lwów (1920). There was another Battle of Lwów (1939), after which the Soviets took possession of Lvov. The NKVD jailed their Ruthenian political opponents and murdered many of them before evacuating in the face of the German invasion in June, 1941. There were pogroms in 1941 and an uprising against the Germans in 1944.

Jan Kazimierz University and the nearby polytechnic were targets of the violence. In July, 1941, twenty-five Lviv professors were murdered in the Wulka hills by the Nazis. The victims included the mathematicians Stanisław Ruziewicz, Kazimierz Bartel, Antoni Łomnicki and Włodzimierz Stożek (whose two sons were also among the victims). The law professor Roman Longchamps de Bérier, who had been the rector of the university, was killed with his three sons. A descendant of another victim, the economist Henryk Korowicz, has a post about the massacre (at which I found the Nazi newsreel posted below). Later in the war, the following Lvov mathematicians were killed by the Germans: Juliusz Pawel Schauder, Herman (aka Henryk) Auerbach, Moses Jacob, Stanislaw Saks, and Max Eidelheit (who is listed among the casualties in Ingarden's memorial to Schauder).

Another mathematician, Stefan Kaczmarz, was killed by the Soviets. So, too, was Stanisław Głąbiński, a Polish government official who had earlier been the rector and dean of the law school. He was killed in 1941 by the NKVD in Lubyanka Prison.

Before WWII, Lwów's population included 150 000 Poles, almost 110 000 Jews, and 80 000 Ruthenians. Only a few hundred Jews remained in Lvov at the end of the war. During and after the war, the Soviets deported the Poles westwards across the new Polish-Soviet border. As a result, by 1947, the city had lost more than two-thirds of its pre-WWII population.

To quote from a New York Times article that was written during the Soviet occupation in 1939, 'Lemberg is a symbol of what is happening because it stood so long as an outpost of the eastward push of western civilization and now becomes a sign of a push in the opposite direction.' ['Break-up of eastern Europe is symbolized in Lwow' by Anne O'Hare McCormick (Sept. 25, 1939).] The Times reporter here presents a trope that had been given life by Poles and other westerners, who saw Lemberg not simply as a frontier town between countries or kingdoms or even empires but, rather, as a town on a fault line between civilizations. (The trope had been promoted especially by Soma Morgenstern, an accomplished author who lived in Lemberg before WWI.)

After WWII, many of the deported Poles moved to Wroclaw. They were followed in 1956 by Lwów's monument to the Polish poet Aleksander Fredro. In his book Uprooted: How Breslau Became Wroclaw during the Century of Expulsions, Gregor Thum describes the transfer of the Fredro memorial (p.298). It used to stand opposite the Scottish café. In fact, the picture at the top of this post is from the perspective of someone standing in front of Fredro's statue. The statue was replaced in Lviv by a statue of the Ukrainian hero Mykhaylo Hrushevskyi. Fredro's statue was moved from Lwów (now Lviv) to Breslau (now Wroclaw), where it found a new home on a site that had previously been occupied by an equestrian statue of the Prussian King Friedrich Wilhelm III. The re-named cities incorporated new memorials, though none of the memories or identities were really new; they were just shifted or transposed according to Stalin's wishes.

One of the strengths of the law department at Jan Kazimierz University was international law. Philippe Sands wrote a paper about some of the more accomplished alumni of that law program. The alumni include Louis B. Sohn, Sir Hersch Lauterpacht, and Raphael Lemkin. The last two made important contributions to the Nuremberg War Trials as well as to the UN's Genocide Convention and the Universal Declaration of Human Rights. Along with them, the Leopolitans Simon Wiesenthal and Philip Friedman also survived the savagery that erupted in Lviv. They, too, worked for truth and justice, ensuring that civilization would have the last word.
Posted by praymont at 12:22 AM