Cheer up, Arty! It's your birthday 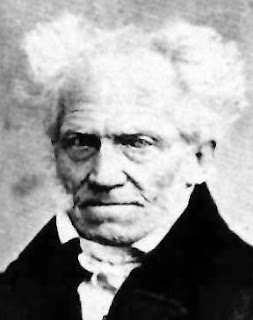 I recently read some of Arthur Schopenhauer's work. He was a first-rate aphorist who, unfortunately, diluted his pithy wisdom with mediocre metaphysics (a sentiment shared by Isaiah Berlin).

Here's some of George Carlin's wisdom: 'Inside every cynical person, there is a disappointed idealist.' No one more clearly epitomizes this truth than Schopenhauer. He was 'cynical' in the everyday sense of that term (as opposed to the technical, philosophical sense). Schopenhauer's cynicism was an aspect of his pessimism. He held out no great hope for humankind, which is one reason why he recommended resignation and renunciation -- resign yourself to our collective failure to advance morally beyond our predecessors, resign yourself to the fact that romantic love is generally a cruel joke, etc. etc. and, accordingly, renounce your worldly hopes. Such world-denying pessimism must be grounded in idealism (Carlin's point), for only against the backdrop of very high, ideal standards can such a sweeping condemnation of worldly endeavour make sense. And Schopenhauer was an idealist with a vengeance. He damned the chilly shadow-land of history as forever farcical and, shunning it, sought the perfect luminescence of Plato's ideal forms. Since he eschewed any divine agent of vengeance, Schopenhauer took its expression upon himself. From his disillusion flew the cutting aphorisms.

Schopenhauer set his idealism in a metaphysical nightmare. He tried to bring together Kant's noumenon, the Platonic forms, and the will ... oops (cue the Beethoven) ... the WILL. A volatile mixture, to be sure -- I just hope he had good insurance. Somehow, the really real is supposed to be noumenal (hence beyond time and plurality) and ideal in Plato's sense (also beyond time but apparently plural despite the Form of the Good's best efforts) and volitional (and thus essentially temporal). Moreover, for Schopenhauer, each person's deeds arise from her character. But character, for Schopenhauer, is noumenal, which puts it beyond the reach of causation and, indeed, beyond any application of the principle of sufficient reason. So how can anything 'arise' from it? Also, being noumenal, it admits of no plurality. But then how can there be several characters, each accounting for our diverse acts? Perhaps the really real was also beyond arithmetic. Ah well, whereof one cannot speak ....

[Update (added Feb. 23): The status of Platonic Ideas in Schopenhauer's system is tricky, to say the least. They're the focus of pp. 232-4 of v. 1 of the World as Will and Idea. Schopenhauer there says that the Platonic Ideas are beyond any application of the Principle of Sufficient Reason, which, in his system, suggests that they're noumenal. Nevertheless, he also says that that the Ideas are essential to an objectification of the will, which suggests that they're phenomenal. The most thorough investigation of this matter that I know of is in a paper by James and Dale Snow: 'Was Schopenhauer an Idealist?' (Journal of the History of Philosophy 29 (4) 1991). They conclude that Schopenhauer's 'Platonic' Ideas are meant to be in time; the Ideas are sempiternal rather than eternal.]

Still, the metaphysical train wreck should not detract so much from Schopenhauer's accomplishment. He advanced good criticisms of Kant's ethics (and anticipated some of G. E. M. Anscombe's points) and developed our notion of the unconscious (along with Fichte and Schelling). No other second-rate philosopher (but first-rate aphorist) has had such a profound influence. Among those whom Schopenhauer influenced the most are Wagner, Wittgenstein, Borges, Burckhardt, Turgenev, Thomas Hardy, Joseph Conrad, Samuel Beckett, Richard Taylor, and Thomas Mann. (Mann wrote an adulatory piece about Schopenhauer in 1938.) And on and on. Nietzsche, Tolstoy, and Huysmans had intense Schopenhauer phases but eventually opted for more life-affirming views. And though he denied it, there has long been a suspicion that Freud must have read Schopenhauer earlier in his life. Finally, here's Albert Einstein in 1933 with one of my favourite Shopenhauer quotations:


I do not at all believe in human freedom in the philosophical sense…. Schopenhauer’s saying, ‘A man can do what he wants, but not will what he wants,’ has been a very real inspiration to me since my youth; it has been a continual consolation in the face of life’s hardships, my own and others’, and an unfailing wellspring of tolerance. This realization mercifully mitigates the easily paralyzing sense of responsibility and prevents us from taking ourselves and other people too seriously; it is conducive to a view of life which, in part, gives humour its due.

Schopenhauer was one of the earlier western philosophers to take seriously an eastern philosophical tradition and he was among the first prominent intellectuals to take seriously the ethical status of animals. These advances, together with the list of luminaries who admired Schopenhauer, lead me to suspect that the above metaphysical objections may well derive from misunderstandings on my part.

I'm no expert on Schopenhauer, but I didn't think he regarded character as noumenal. Character is empirical, after all, so it would be weird to consider it also noumenal. Maybe that's your point.

I think of Schopenhauer as thinking of people as embodied will. So the will does not cause our actions any more than the body does. The body performs the actions. Its doing so is a manifestation, but not an effect, of the will. And through one's actions one's character is revealed. Or something like that.

Hi Duncan. Thanks for your comment. Schopenhauer distinguishes between 'intelligible' and 'empirical' character. The former is character as it is in itself; the latter is character as it appears in the phenomenal realm (he says this distinction is rooted in Kant). Intelligible character cannot be changed and it determines one's phenomenal responses to events. So, one's empirical character is established gradually via one's choices, which reveal the true (intelligible) character one has always had. Choices afford an opportunity to discover one's true character, but one can't change intelligible character (since it's character-in-itself it's beyond time and hence immune to change). Some of this appears on p. 378 of the Haldane-Kemp translation at Gutenberg books: http://www.gutenberg.org/files/38427/38427-h/38427-h.html#toc19

The putative fact that intelligible character cannot be changed is one reason why Schopenhauer denies that philosophy can make any fundamental change to one's life. For that last point, see Julian Young's book Schopenhauer, pp. 158-65).

Duncan -- On reflection, I think 'intelligible character' is what you have in mind in your 2nd paragraph when you speak of the will. Granted, he takes bodily action to express the will (as opposed to being a causal effect of the will). Still, he treats the Principle of Sufficient Reason (PSR) as covering just the phenomenal domain, and causation, for him, is only one form of the PSR. Any relation of explanans to explanandum (of ground to whatever gets explained by it), regardless of whether the relation in question is causal, is an instance of the PSR. I can't see how Schopenhauer can get more specific about the relation between, on the one hand, intelligible character (or anything noumenal for that matter) and, on the other hand, empirical character or bodily action (or anything phenomenal) without taking the former as some sort of basis for the latter -- in short, without bringing the noumenal within the scope of the PSR (as something that constrains and so explains the phenomenal).

Thanks! I had forgotten the details, but this all sounds right.