Joad and the law 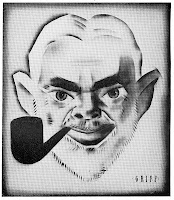 I gave a rough outline of Joad's life but didn't know that one of his books, Guide to the Philosophy of Morals and Politics, was quoted in the 1988 Supreme Court case that removed Canada's old abortion law (R v. Morgentaler). Siris drew attention to this connection.

Joad himself was in court more than once. His public downfall eventuated from his fare evasion on a train. In that case, Joad initially entered a plea of 'guilty' but then tried to defend his action by explaining how the 'fare evasion' was the result of an honest mistake. The magistrate declared that Joad's explanation had the effect of changing his plea to 'not guilty'. This prompted another hearing at which Joad supplied more half-hearted rationales, culminating in his conviction.

I learned some of these details from the excellent Times of London archive (which is behind a paywall). From the same source I discovered that Joad was once taken to court for libel. The defamatory statements appeared in Joad's Guide to Modern Wickedness (1st ed., 1939) -- given the above caricature of Joad, I wonder if the Guide was a how-to. According to the Times edition of July 29, 1939 (p. 3), Rev. E. L. Macassey, vicar of Mapledurham, went to court for damages from Joad and his publisher, Faber & Faber (and from the printers). The vicar's ire had been raised by material in Chapter 3 ('Religion'), in which Joad supposedly quoted from a sermon that had been preached at 'his local church'. In the book, Joad named neither the vicar nor the church but did provide enough information for people in the Mapledurham area to identify the vicar. According to the Times' record of the case, the defamatory passages included 'extremely objectionable references to the vicar ..., references that no clergyman could allow to pass unchallenged.' No further specification of the libelous statements is given. Joad and Faber agreed to apologize to the vicar and pay him £250 (which the vicar gave to charity). Also, they agreed to withdraw unsold copies of the book and remove the offending passages before the book was reprinted. It was reprinted in the early 1940's.

Unfortunately, none of the editions of his Guide to Modern Wickedness appear to be on-line. Some of Joad's other works are in the wonderful Internet Archive.