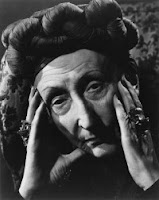 The Guardian has two reviews of Richard Greene's new biography of Dame Edith Sitwell. There are lots of other reviews -- by Claudia FitzHerbert, Robert O'Byrne, Duncan Fallowell, Sarah Bradford, Deborah Longworth, and by Victoria Glendinning (whose own biography of Edith Sitwell appeared in 1981). The reviewers are divided over the merits of Greene's book and of Dame Edith's poetry. They all seem to agree, though, that Edith Sitwell had a genius for publicity and was a celebrity (the proof of this is usually taken to be the photo of her with Marilyn Monroe -- see below). In the Daily Mail, Roger Lewis portrays Sitwell's life as a gag-a-minute comedy skit. 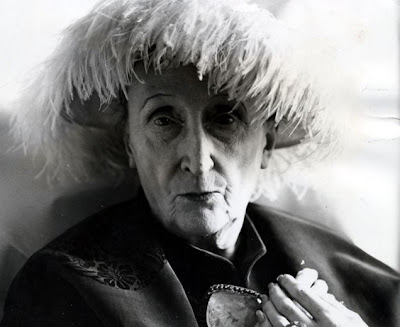 At the Telegraph, Dr. Christopher Goulding wrote in to correct a remark of Claudia FitzHerbert's, who had said that Edith, while still a child, received as a gift from her father a book called How to be Pleasing, Though Plain. Dr. Goulding says the book was more likely called How to be Pretty, Though Plain by C. E. Humphry. I haven't seen this book, but rummaging around on the net I found these gems quoted from Ms. Humphry's book:

'When the face is washed care must be taken to dry the nose downward, not upward, and whenever the nose is touched with the hand or handkerchief, the same advice must be borne in mind or very ugly results will follow.' 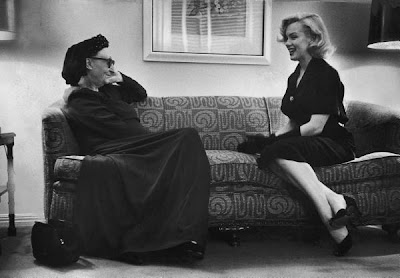 'To Remove Freckles: Apply with a linen cloth two tablespoonfuls of grated horseradish mixed with teacupful of sour milk.'

'Now, I am far from wishing to encourage tight-lacing, but if girls and women will practise it I should like to point out how it may be done with the least possible injury to the organs of the body.... girls (and women) will tight-lace, no matter what strength of protest is made, and it is better for them to do it in the least injurious way, if possible. Therefore I offer the following advice:-.... Of course, this is all unnecessary when funds are available to command a well-made corset from a trained physiologist.'