Fermor and 'Pips' Schey in The Hare With Amber Eyes

One of the most popular entries in the books-of-the-year lists for 2010 is Edmund de Waal's The Hare With Amber Eyes, which chronicles the history of his family, the Ephrussis, and their collection of netsuke.

The book has no index, which is unfortunate, since some interesting characters turn up in its pages. For instance, Patrick Leigh Fermor puts in an appearance on p. 149. Part way through his Danubian trek, he stayed at Kövecses (which appears now under its Slovakian name, Strkovec), where his host was Philipp ('Pips') Schey, Baron von Koromla, who was the brother of de Waal's great-grandmother, Emmy Schey von Koromla. The family's noble title seems to have been conferred on an earlier Philipp Schey for his services in support of the Habsburgs in the 1848 uprising (more here).

This might be a picture of Pips Schey's house, which is now apparently a home for disabled adults, and this might be a photo of the neaby village of Kissujfalu, where Schey and Fermor parted company: 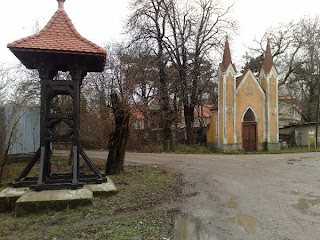 Fermor thoroughly enjoyed his visit with Schey, who introduced the young traveller to Proust's works. One of the Paris Ephrussis, Charles Ephrussi, knew Proust and was (along with Charles Haas) a model for Charles Swann.