Passionate distortion can be fun, I guess 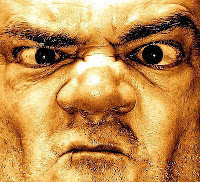 A common objection to the New Atheists is that their own atheistic movement bears many of the hallmarks of a religion.

I don't know if that's true (partly because I'm unsure of how to define 'religion'), but many of the New Atheists do put me in mind of a particularly irksome kind of religious person, the moralizing prude.

I'm afraid my example of this sort of religious adherent is my own maternal grandmother -- may she rest in peace (though she probably won't). Her moral judgments were quick, passionate and about as amenable to rational critique as a tornado. Righteous indignation was her favourite pastime and no one was going to spoil her fun by quelling it with reason.

I got a similar impression while reading the comments to a couple of blog posts about Harriet Baber's article in the Guardian. The blog posts are at Pharyngula and Butterflies & Wheels. (See Siris for more intelligent commentary.)

I don't agree with Baber's hedonistic position, but I don't think her view is as bad as it's made out to be in the comments at those two blogs. E.g., Baber said that the truth is overrated. Several of the commenters misinterpreted her as saying that the truth is unimportant. I piped up in the comments in order to correct the misinterpretation, but got the impression that there was little point in doing so. It would only spoil some of the other commenters' fun, which seemed to reside in bashing Baber herself.

If these commenters were really so concerned with the truth, they wouldn't devote so much time and energy to ad hominems but would, instead, simply consider Baber's argument and the reasons for being unpersuaded by it. Also, they would expend more effort in trying to tease out of her article a chain of reasoning that is more plausible than the silly views that they've attributed to her. Attributing to someone the best argument that fits her words is an important step in getting at the truth. When people don't do so, when they instead interpret the other person as giving a weaker argument, that's a sign that they are primarily concerned not to arrive at the truth but, rather, to depict their interlocutor as a miscreant, a worthy target of their passionate, righteous indignation. In such a context, anyone who tries to point out the uncharitable nature of their interpretation is likely himself to become the target of their moral outrage.

In the comment threads at Pharyngula and Butterflies & Wheels, many of the commenters got into a royal tizzy and subjected Baber to all manner of insult and character assassination. But insult isn't argument. In fact, it often has negative value, since it tends to divert people from the dispassionate search for the truth. Dialogue that aims at truth should be a lot less fraught.