Why are events like the G20 meetings still held in large cities? We here in Canada have so many little islands where this meeting could have been held. Unoccupied islands, islands that have nothing but a plush resort or two, literally thousands of locations where the G20 participants would have been much safer than in downtown Toronto.

Our elected officials know these meetings attract violent protesters, and they know that the costs due to vandalism and lost business are huge. Today, Toronto's pretty much closed for business. Even the subway trains aren't running south of Bloor. I walked south from Bloor to get pictures of some of the damage to retailers, but first ....

I happened to be at the very corner where the Black Bloc showed up and destroyed two abandoned police cruisers. The police had been ordered to 'disengage', basically sacrificing the two cars to the vandals.

I'm generally left of centre in my economic views, but how on earth this destruction is supposed to accomplish anything worthwhile is beyond me. Of course, it's supposed to attract mega-publicity. Mission accomplished! But it's false that all publicity is good publicity. Any intelligent criticism of the G20 leaders will be drowned out by this violence and vandalism. Critics of the G20 leaders will be branded as marginal, dangerous people. The added publicity has only negative value for left-wing positions.

I'm a lousy photographer, but I managed to get some usable shots. Notice that the police were content (at this point at least) to pull back and establish a boundary.

There really didn't seem to be that many protesters, but the worst ones sallied forth and enjoyed their anarchic outburst. Due to their relatively small numbers, they didn't try to break through police lines (as far as I could see), opting instead to turn east and then north along Yonge Street (Toronto's main street), where they broke many windows.

They've succeeded in turning most of this fairly liberal city's population against them. 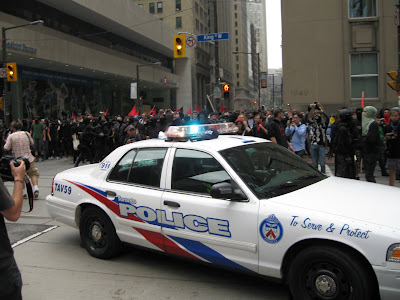 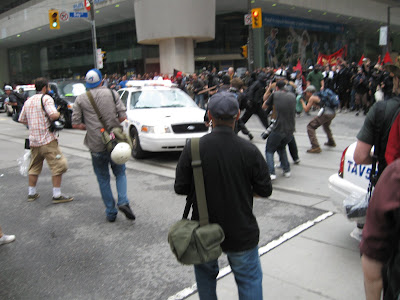 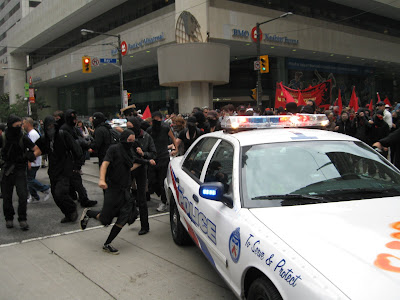 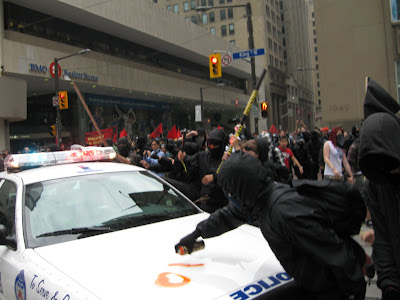 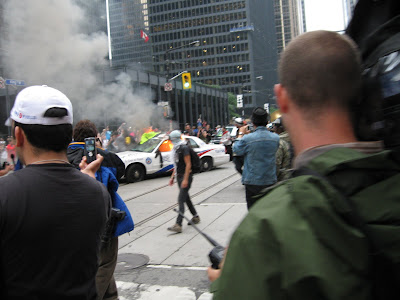 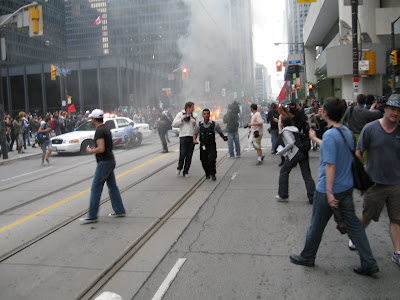 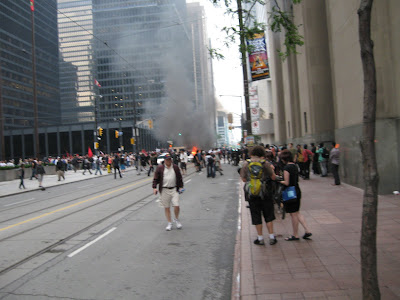 Here you see the police who had been ordered to "disengage" when the Black Bloc arrived. They're not that far from one of the vandalized cars. They must have been awaiting further orders. 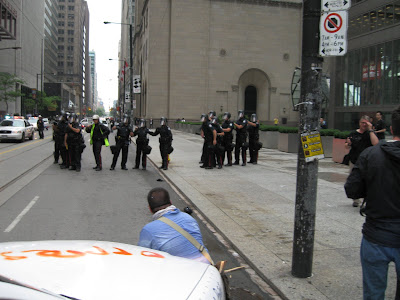 They were sent east on King St. to form a line just west of Yonge St. 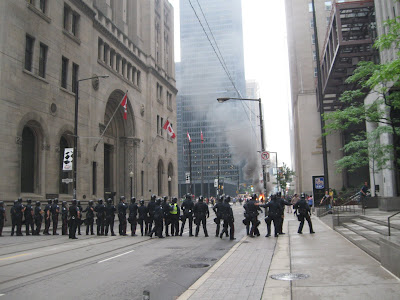 Shortly after I had turned north on Yonge, I saw this media savvy police bus* racing south towards King St. My conclusion: the police must have been told not to engage the protesters unless they had a comfortable superiority in numbers. (* 'Media savvy' because it's covered in a recruiting ad.) 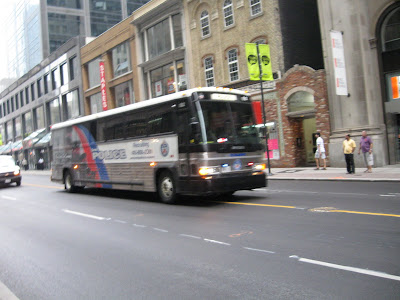 It is standard practice of the authorities to radicalise peaceful movements by infiltrating them & so in the public's eyes equating dissension with violence/terrorism. I think they were so blatantly caught doing this relatively recently in Toronto that the authorities had to admit to the fact. Not that the mainstream media would ever go heavily down the route of such stories.