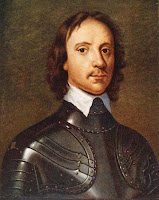 I thought it was only today's politicians who curried favour by playing at being 'one of the boys,' or 'someone you could have a beer with.' It turns out that this trick is quite old, old enough to have been ridiculed in a mystery novel in 1951. The novel in question is The Daughter of Time by Josephine Tey (aka Elizabeth MacKintosh). She has one of her characters blame Cromwell for starting this shtick:

'Cromwell started that inverted snobbery from which we are all suffering today. "I'm a plain man, I am. No nonsense about me." And no manners, grace, or generosity, either. ... In some parts of the States, I understand, it's as much as a political man's life is worth to go to some constituencies with his tie tied and his coat on. That's being stuffed-shirt. The beau ideal is to be one of the boys' (The Daughter of Time, p. 30).

Elizabeth MacKintosh (one of whose pseudonyms was Josephine Tey):