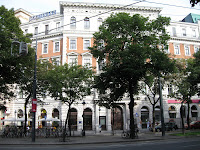 This photo is of Doktor-Karl-Lueger-Ring 12, which is by the Schottentor subway station, across the street from the main University of Vienna building (and adjacent to the Palais Ephrussi). There's little of interest in this building (which includes a McDonald's), but I tentatively conjecture that it's where Cafe Schottentor was once located. [NOT! see 2nd update below]

The Schottentor Cafe is one of the cafes preferred by Godel and other members of the Vienna Circle. It is mentioned by Elias Canetti in The Play of the Eyes. He says, "It was amazing how often I ran into Friedl [Benedikt] .... I'd take my seat in the empty No. 38 streetcar, look up, and there she'd be .... She always rode as far as Schottentor .... I went to the Schottentor Cafe. When I entered, she was already there, sitting at a table with friends." (p. 240)

Additionally, in her paper in Endeavour, Maria Rentetzi says that in the 1920's Cafe Schottentor was "a meeting point of Vienna's scientific, political and artistic circles, including women such as the journalist Hilde Spiel." (p. 44, n. 22) Spiel, it turns out, met Canetti at Cafe Schottentor.

It was also a favourite haunt of the poet Theodor Kramer, who is quoted as saying in 1945 that the cafe was opposite the University. Assuming he meant by 'the University' the main university building, the above location is the most likely site of the Schottentor Cafe.

I had initially thought that 'Cafe Schottentor' was an abbreviation of 'Cafe Victoria am Schottentor', the full name of a cafe which used to be at Schottengasse 10 (in the same building as the one pictured below). However, that cafe's name seems instead to have been shortened to 'Cafe Victoria' (which Godel visited with visiting family members, according to John Dawson, Jr.).

Update (Sept. 11): I've learned from Diane Silverthorn that there was another Cafe Victoria in Vienna. It was in the Hotel Victoria on Favoritenstrasse. So, I'm not sure if Professor Dawson's reference is to that cafe or to the Victoria am Schottentor.

Update (Sept. 15): Cafe Schottentor might have been a short block further from the university than I believed. This is according to Professor Karl Sigmund (from the Math Dept. at the University of Vienna), to whom I was referred by Professor John Dawson. Professor Sigmund informs me that there was until recently a Pizza Hut in the Schottentor's old location, but that a new cafe has opened there (at Schottengasse 2). It's called the Café im Schottenstift . The last cafe in that location before the Pizza Hut was Cafe Haag (Hague), which closed in 1997.

Update (Feb. 24, 2009): It looks like my original conjecture wasn't so far off. Here's a pdf copy of a 1936 weekly paper, Die Neue Welt (Feb. 7, 1936), which lists a number of cafes on p. 6 (right column). Cafe Schottentor is listed there as being located at Dr. Karl-Lueger-Ring 10, which would put it just to the right of the above pictured McDonald's (the address for which is Dr. Karl-Lueger-Ring 12). This location is now the site of a cafe called Coffee Day. The building in which it's located looks like a relatively new annex joined to the older structure that houses the McDonald's. I wonder if the part of the structure that housed Cafe Schottentor was wrecked during the war, with the result that the cafe re-located to Schottengasse 2. 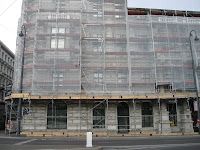 Thanks for your comment on my review of Human Smoke. Actually, the book finishes with the invasion of Pearl Harbour, its main thrust being the topic of whether the US should have entered the war. There is very little about relations with Russia.

On the whole, its a rather annoying book, being very US-centric

interesting blog you have. did you also document some of the buildings of Paul Engelmann? After finding out about his collaboration with Mr.W. i became curious of how his own architecture actually has looked like.

Antonia: Thanks for your comment. No, I'm afraid I didn't get to all the things I wanted to see in Vienna. Maybe next time.

Take it as you will:

The truth is that I have always hated the Viennese coffeehouses because in them I am always confronted with people like myself, and naturally I do not wish to be everlastingly confronted with people like myself, and certainly not in a coffeehouse, where I go to escape from myself. Yet it is here that I find myself confronted with myself and my kind. I find myself insupportable, and even more insupportable is a whole horde of writers and brooders like myself. I avoid literature whenever possible, because whenever possible I avoid myself, and so when I am in Vienna I have to forbid myself to visit the coffeehouses, or at least I have to be careful not to visit a so-called literary coffeehouse under any circumstances whatever. However, suffering as I do from the coffeehouse disease, I feel an unremitting compulsion to visit some literary coffeehouse or another, even though everything within me rebels against the idea.
— Thomas Bernhard, Wittgenstein’s Nephew

AR: Thanks for that quotation. Vintage, grumpy Bernhard! It reminds me of this line by Alfred Polgar in his 'Theory of Cafe Central':

"Its inhabitants are … people whose hatred of their fellow human beings is as fierce as their longing for people, who want to be alone but need companionship for it."

Great blog! So up my alley, and I appreciate it. I am trying to locate a Cafe Ronacher that was frequented by Freud and his circle, before WWI. No, not the one facing the Ronacher Theater-- that was post-War. I think I have evidence it was an Art Nouveau establishment, mainly underground, with a wintergarten at the intersection of Schottengasse and Schottenring -- huge intersection. Thanks so much if you can heat up the trail for me!

Hi Elatia -- That sounds interesting. I've looked through my sources and, I'm afraid, haven't located any info about the Cafe Ronacher (apart from the one near the theater of that name). I wonder if it was located where the Café im Schottenstift is. That cafe opened fairly recently, but I believe there's been a cafe/restaurant in that location since the mid-19th Century. If I recall correctly, the Café im Schottenstift is partly underground and has a garden (see the links in the Sept. 15 update in the post). I'd be interested to know what more you learn about it.

You may not be checking this blog anymore, but I have the address of the Cafe Schottentor from the Vienna Address Book of 1939. The address was Dr. Karl Lueger-Ring 10.

Thanks, Lydia, for digging up that info. I appreciate it.

I was looking for Cafe Scottentor as my aunt frequented it often when she was a student in Vienna in 1936 and was very fond of it as it was where she met her friends! She would described the coffee and tortes she enjoyed there and it all seemed very decedant and a little bit risqué! She never forgot the place when she returned home to Wales.

Thanks for your comment, anon. I wish we in the Anglo-American world had cafes as great as these old Viennese ones.